Evaluation based on scientific publishing: Other citation metrics

The Thomson Reuters Journal Impact Factor's greatest weaknesses are that it does not take into account the quality of the article being cited, nor does it take into account the different citing norms and practices of different disciplines. In order to address these weaknesses, various new journal citation indicators have been developed. The new indicators evaluate the quality of the citing, based on the quality of the journal that the citing article is published in. The evaluation is usually based on the PageRank algorithm that enables us to analyse the articles and the network that the citations form, and in this way analyse the relative value of the citation. Indicators based on the PageRank algorithm are not as straight forward and easy to understand as the IF, and they do not have the same well established position as the IF. However, new indicators are still being developed, and their status and usefulness in evaluation remain to be seen. On the other hand, they do draw attention to the many faults in evaluation, and they bring some competition to a field that has always been dominated by one commercial enterprise.

The Article Influence score measures the average influence, per article, of the papers in a journal. As such, it is comparable to Thomson Scientific's Impact Factor. It is calculated by dividing the Eigenfactor score by the number of articles published. Article Influence scores are normalized so that the mean article in the entire Thomson Journal Citation Reports (JCR) database has an article influence of 1.00.

The Article Influence score is a journal specific Eigenfactor score. It is calculated by dividing the Eigenfactor score of the journal by the number of articles published. It tells the average impact of an article published in a journal from a five year period after the publication of the article. The Article Influence score is comparable with the IF of Thomson Reuters. 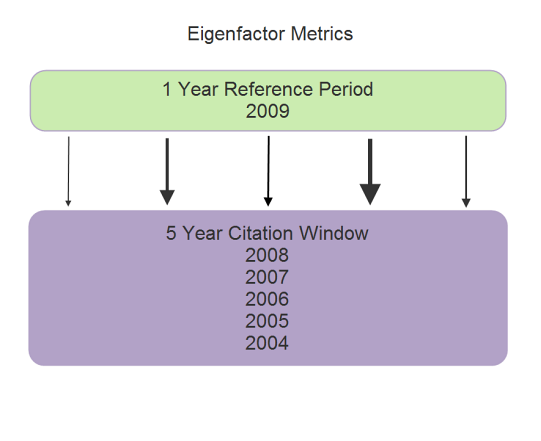 A journal has an h-index of h if there is at least h papers published in that journal that have received at least h citations each.

The calculation of the H-index is not dependent on the defined citation window. If the H-index is calculated for the whole lifetime of a journal, it favours journals that have been established a long time ago. For most uses such a journal H-index does not seem useful. Instead, one must decide on the most suitable citation window. An advantage of using the H-index instead of the Impact Factor for evaluating journals is that the impact gap between multidisciplinary journals, such as Nature and Science, and other journals is significantly reduced making comparisons meaningful between these journals. Additionally, the impact of journals specializing in review articles is inherently deflated because of the limited number of annual articles in such journals.

The h-index is an alternative to the IF when evaluating the impact of journals based on citation information. It gives a rough estimate on the productivity of a journal over a long time period. The good qualities of the h-index, compared with IF, are its stability and its balanced combining of quantity and quality, which reduces the over-valuing of journals that publish review articles. Because the h-index is not based on the average number of article citations, it is not influenced by the fact that a few articles might have massive amounts of citations. However, the amount of articles a journal has published will affect somewhat the h-index score. A journal that publishes many articles will most likely get a higher h-index score than a journal that does not publish as much, because each article is a potential subject for citing. A journal that does not publish many articles will probably not get a high h-index score even if most of its articles were to be widely cited. The h-index is not calculated for one specific fixed time period like the IF, but it can be calculated for whatever time period you want, for example, for one or five years. This allows comparisons of journals that differ from each other in terms of how fast the journals start getting citations. However, even with the h-index, it is still preferable to compare journals from within the same discipline.