Altmetrics measure the the impact of publications (e.g. articles, books) in social media and other social networking services by tracking for example the number of downloads, mentions on news sites, tweets, likes and traditional citations.

Altmetrics help to assess the impact of publications quicker than traditional citation-based metrics. Tweets and mentions on news sites may accumulate very quickly after publication, whereas for citations this may take months, even years.

How to get your publication included in altmetrics data aggregation

To have your publications included in altmetrics data aggregation, they must have a persistent identifier, such as for example:

After you have acquired a persistent identifier for your publication, the next step is to make it visible in a source tracked by altmetrics tools. The image below shows the online services tracked by Altmetric.com, which is the most prominent altmetrics aggregator. Of these, the most commonly used services among researchers are for example Twitter and Facebook.

What types of impact do altmerics track? 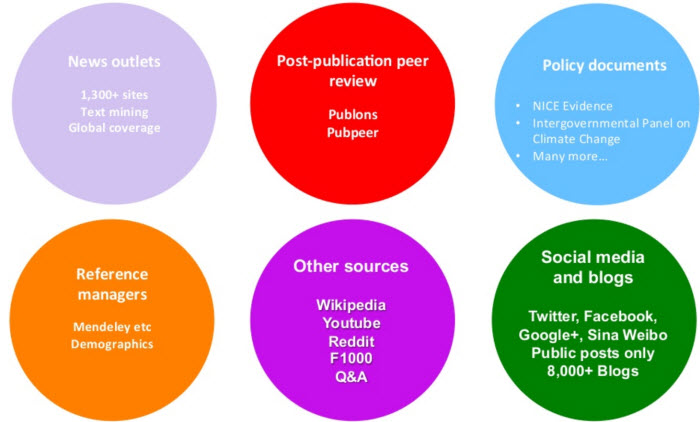 Track the impact of your publications

The most prominent altmetrics service is Altmetric.com, identifiable by the colourful "doughnut" icon, which is often accompanied by the text "Altmetric". The service is used by countless international publications, which use the attention score provided by Altmetric.com to indicate the impact of articles. Here's an example of the information provided by the service.

The Altmetrics doughnut displays the attention received by a publication in two ways:

The meanings of the different colours in the doughnut and how the attention score is calculated are described in https://www.altmetric.com/about-our-data/the-donut-and-score/.

PlumX is a little less known altmetrics service, which functions in much the same way as Altmetric.com. For example Scopus uses PlumX metrics to rate the online impact of articles.

In PlumX each publication is not given an individual score, but the different colours and the sizes of the "branches" in the icon indicate the level of impact in different online services. For example if the blue branch is larger than the others, the publication has received a lot of attention in social media.

PlumX metrics are described in more detail on the Plum Analytics website.

Increase the visibility of your publications

Researchers can use the Impactstory.org service to share and promote the online impact of their research.

When you register, the service:

With the Kudos service researchers can share their most important publications, explain them and track their usage in various databases and in social media

Kudos helps others find your work and understand it